In the spring of 2012, the Gateway Building had been sitting vacant for five years. This building sat at a major entryway into Lexington, Kentucky. With such a prominent location, the city wanted to get this building fixed up, in use, and looking nice to represent their city. Ron Turner of Turner Development saw potential in the two-story 33,000 square foot (3066 square meter) building, and had the drive to take on this project. He bought the building in June of 2012 and wanted to get this project completed by September 1 of that same year.

This two-story building had some major slopes on either side. There was a sizable cut – up to 30 ft. (9.1 meters) on one side – to get down to the building’s entrance level. Turner explained, “To continue the project, I needed to put up retaining walls quickly; something that would hold and not give me problems 5 or 10 years from now.”

When Turner saw another Redi-Rock wall in Lexington, he knew it was what he wanted. Turner explained, “You could tell it was just not a generic product. I looked at this project over there, and looked at how the stones went together and how they set in each other like a puzzle. And I said, ‘wow this is want I want – what I need to go with.'”

Choosing Redi-Rock offered several benefits to the project, including:

“I could not have chosen a better contractor. It was a fast, hard job, but it allowed me to pick up production on my building about 10 days early. Which means a lot of money,” said Turner.

Turner continued, “The performance was excellent. I could not be any more pleased with this project. If I had another job to do, which I probably will, there is no doubt that I will use Redi-Rock. No doubt.” 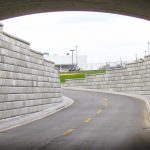